News: Tickets for "The day of Unicorn" (Singapore Readers) 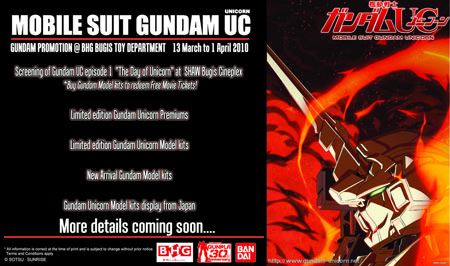 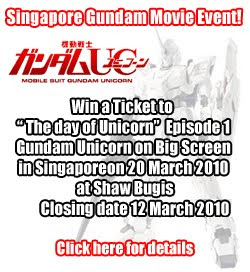 My blogger buddy Leon (Open the Toy) is having three tickets for Singapore very first Gundam anime big-screen screening of Gundam Unicorn episode 1 "The day of Unicorn". This not-to-be missed event for Singapore-based Gundam fans falls on 20th March 2010 (Saturday) from 12pm to 1pm at Shaw Bugis. Leon will be doing a lucky draw from the entries on 14 March. Click onto the above pic for the link and stand to win......Terms and conditions applied

About Unicorn Gundam anime:
Gundam Unicorn is the latest Gundam Japanese Anime for 2010 which is based on the popular original Gundam Unicorn novels in Japan. Episode 1 was released in Japan on 20th Feb 10. The whole series consist of 6 original video anime volumes. The movie is rated PG Rating and has a run time of 50 mins. The screening in Singapore will be in Japanese language with English subtitles.

Gundam Promotion @ BHG Bugis Toy Department:
This screening is a Jointed promotion between Shengtai Toys and BHG. There will be Gundam Promotion at BHG Bugis starting from 13th March - 1st April. All you have to do is to buy $100 worth of any Gundam products at BHG Bugis to get a 1 free movie ticket (Note: Only 200 tickets for redemption). You can redeemed free at BHG toy department Gundam promotions at Toy Department level 3.

During the promotion: there will be limited edition gundam, new arrival gundam, all from Unicorn gundam series on sales so take your pick! Exclusive Gundam Model kits from Japan will also be displayed there as well too.
at March 02, 2010

So, you will be attending the event??

I will definitely try all means to attend bro!

DAMMIT - on wrong side of the world - sucks to be me. You have to let us know what all transpires at this screening. I am sure it will be a great one.

Sorry to hear that. I will definitely blog on the event if I managed to attend the event. Cheers!