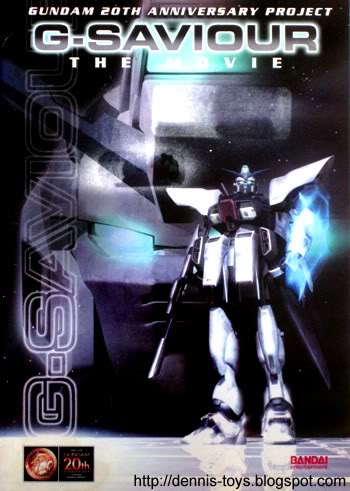 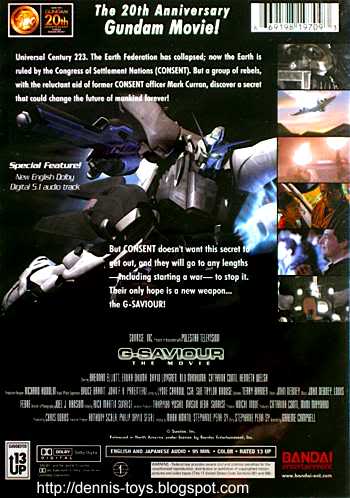 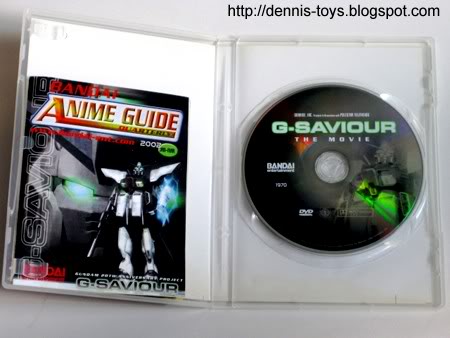 As part of the 20th anniversary Gundam project almost ten years back, Bandai had attempted a brand new try of making a movie of Gundam with human casts alike Ultraman movies. Personally, I think it was a good effort but somehow it didn't have much impact.

G-Savour tells a story of an elite ex- military MS pilot 'Mark Curran' who was caught in a situation having to join the separatists in their struggle to save the earth and colonies from famine. The outlook of G-Saviour was like an adaptation of Gundam F-91.

In my opinion, the movie appeared of low-budget and the costumes & props looked like those rented from 'Starship Troopers'. The CGI movement seems blocky and moved in slow motion but there should be some credits given to the production crews for the used of CGI for a movie of that era. I would say the movie would probably appeal to purely Gundan fans.
at January 29, 2010

I have actually owned this movie for a while. They did a fair job on it considering it was done several years ago.

Granted to me it was kind of "b-movie" ish, but still a great watch.

Thank goodness they never did that for 30th anniversary. The moment I see the human with that pilot helmet I started laughing. If I did not see Zaku and Gundam later I may not even know it's Gundam. Maybe James Cameron or Michael Bay can do a US version of Gundam. LOL

>> Bluedrakon
I have watched the movie once on VCD some time back before I bought the code 1 dvd. I will say the movie isn't lousy. I'm glad I make this part of my collection.

>> LEon
Maybe we ain't so use to human cast Gundam show and G-Saviour probably can't match up to classic sci-fic movies like Starwars. Not to mention comparing it with recent movies like Transformers.

well i must confese i’m a great fan of gundam, but i barely hav seen 1 OVA (OM... sacrilegious !!!) so i can’t giv my opinion... however i saw somewhere an HG model kit of this mecha, and i was tempted to acquire it, but no money, no toys ;((((

OVA is easier to digest but watching the 7mins link on this posting kind of summarized all the action scenes of G-Saviour. I have seen HGUC G-Saviour in the past but don't it's easy to find nowadays. Sad that no money equal no toy.

The robot looks fake and definitley can't match with the special effects of Transformers and Star Wars. Put them in cartoon will be better :)

I get what you meant Desmond. Maybe things that are better in anime drawing should remain the way the it is.