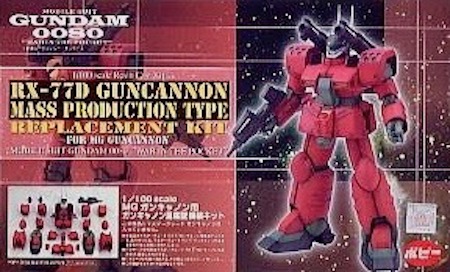 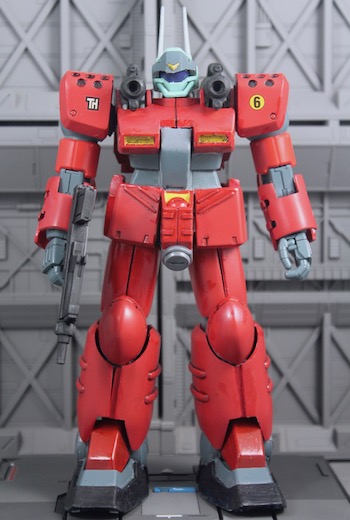 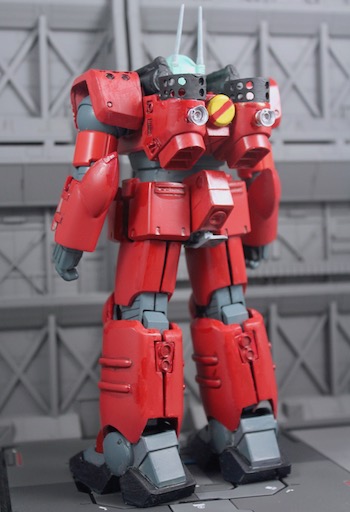 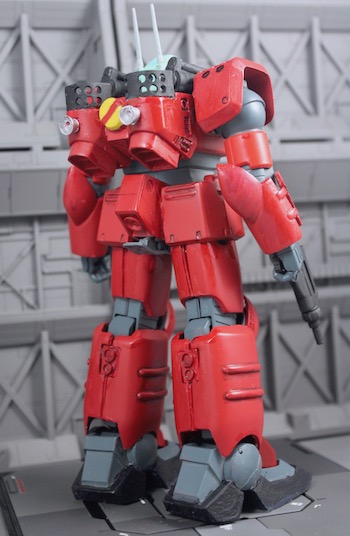 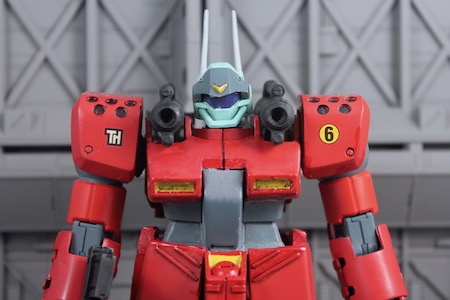 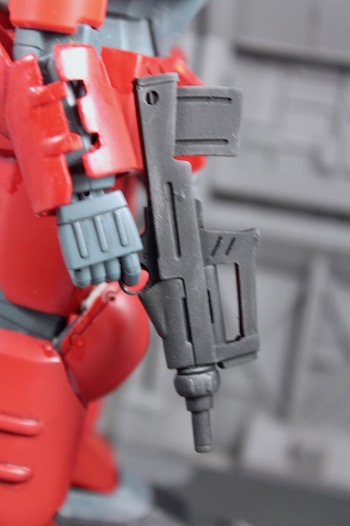 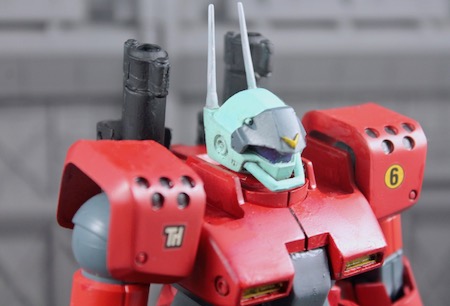 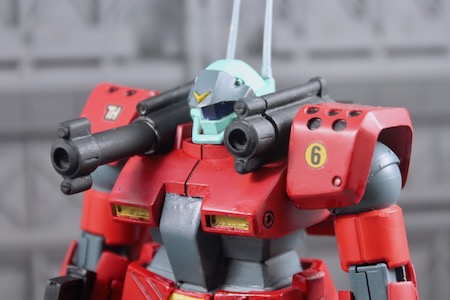 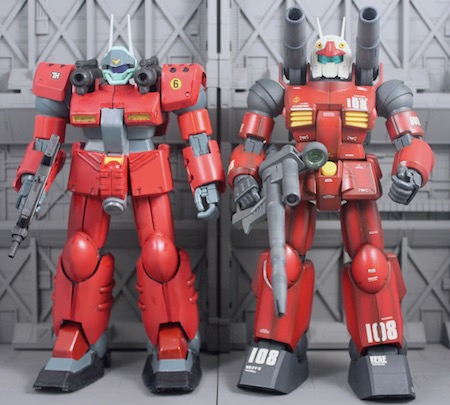 This is one difficult bash/replacement kit to obtain! A stubborn blockhead of mine, insisting on having 1/100 scale, Mobile Suit Gundam, Earth Federation Mass Production Mobile suit, visor type. The 1/100 Scale RX-77D Guncannon Mass Production Type Replacement Kit was produced by B-Club, so scarcely, way back in 2004 and I'm not sure if there is any recast done by E2046.

The replacement kit is manned for Master Grade MG Gun Cannon RX-77-2 (from the Earth Federation's Project V). The resin kits require more effort rather than the standard "right-out-of-the-box" MG kits. I got mine preowned and the it seems like an abandoned project even though the item was assembled and partially painted. I would say the initial state was pretty messed up and I had to spend a few days repairing it. Mainly to cement the respray parts, some hand painting and finally applying the anime alike looking  decals on shoulders.

It's a shame, I didn't put my best effort, also no excuses on my amateur skills that the final result was less than desirable. Due to its rarity, I decided to still proceed with blogging of this kit and I apologised for the poor workmanship.

The replacement parts are kind of filmsy and didn't fit very well to the main kit. Similar to the RX-77-2 Guncannon, the Guncannon Mass Production Type mounts over each shoulder, a mid-range fire support artillery cannon. The kit comes with optional parts for an extension to 240mm Cannon and it has a gimmick of shortening those cannons and flipping them to the backpack in standby mode. The Guncannon Mass Production Type didn't have beam weapon in its arsenal so the supposedly beam rifle had been replaced with a 90mm bullpup sub-machine gun, similarly to those used by GM Type-C. The RX-77D.

Guncannon Mass Production Type is a less expensive variant of the original RX-77-2 Guncannon. This mobile suit made its debut in the anime 'Mobile Suit Gundam 0080: War in the Pocket' with two units were assigned to the Scarlet Team stationed aboard the Pegasus-class assault carrier LMSD-76 Grey Phantom. As predicted, the cannon fodders were easy targets to the Kämpfer and were wasted shortly after deployed.
at August 19, 2017

I always thought MP Guncannon to be better looking compared to its parent. If Bandai ever release the RE version i probably paint in White Dingo color scheme

The upper part of the RX-77D Guncannon, I mean, from the waist up, looks much better than in the RX-77-2 in my humble opinion... I like specially the visor head of the "D" version, which reminds me somehow the Jegan, from the waist down is more attractive the "2" version so a swapping would create a more "handsome" mobile suit, HEHEHE... I guess the reason why they were cannon fodder is mostly on the pilots, an experienced pilot (or ace pilot) would make the most of any mobile suit even under the most adverse conditions... =D

>> Yami
I'm not too sure about passing the good gene from predecessor, I guess they both look pretty good. A thing I'm sure was that the newer design took away those rounder chubby cute element from the original. Lolz. I almost forgotten the MSV White Dingo version. The red version from OVA left me a stronger impression. Maybe it the shock from Scarlet Team instant KO...

Glad you like the RX-77D Guncannon , I guess apart from the visor, the shoulder pad also give the cannon fodder is more cooler look. Unfortunately not the survival rate. Lolz... As a whole, The Gundam 0080 'War In the Pocket' introduced many awesome looking cannon fodder and I see a trend in Bandai releasing more GM like the recent GM Sniper II. GM Command and GM Sniper coming up too!

No need to say sorry. at least you tried to make the figure looks good..

>> Desmond
Thank you for the kind comment bro! It's so rare that I wanted do more for it : )