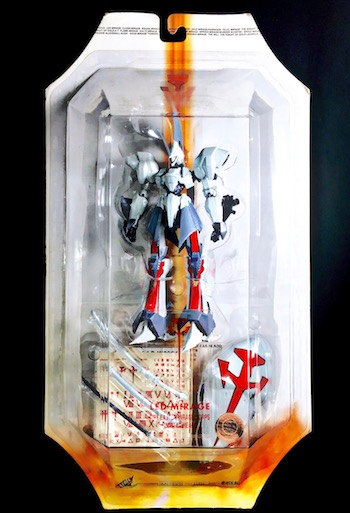 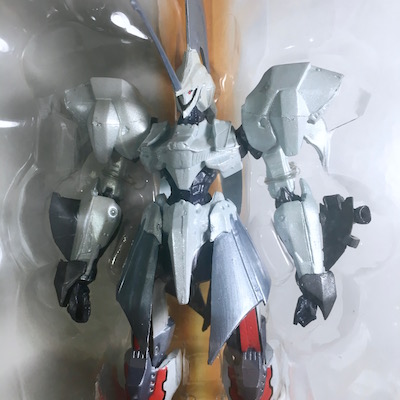 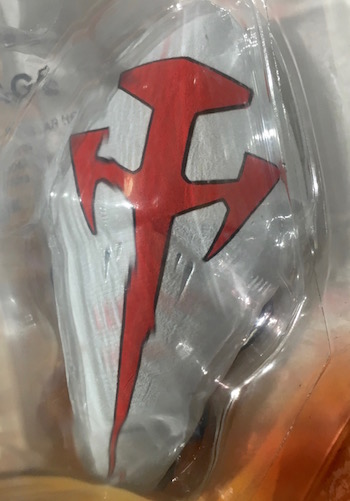 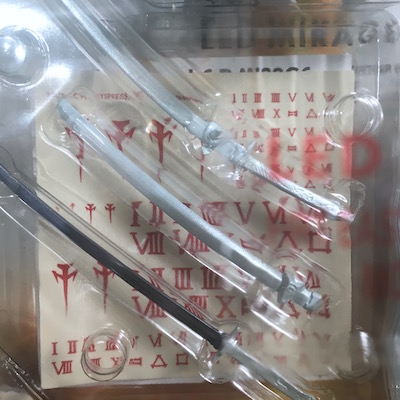 A sudden interest in 'Five Star Stories' after having watched the 1989 movie anime recently on Youtube. I actually knew what the existence of the manga series created by Mamoru Nagano, building on his work on the anime series Heavy Metal L-Gaim. Indeed a long history dated many years ago however its merchandises are hard to come by, especially the figure. To my surprise, a local seller listed this rare and hard to find fully painted version of the L.E.D Mirage from FSS, compared to the common transparent version are much easily available.

Though, L.E.D Mirage isn't featured in the anime movie, this iconic mecha is what we would see whenever anyone searched about the title. Not to mention the knightly design and templar crusader colour scheme. Kaiyodo adorns their growing line-up of action figures with their first-ever mecha, wisely choosing the L.E.D Mirage from Mamoru Nagano's Five Star Stories. This 16.5cm tall figure can pose at all normal arm and leg joints. Comes with 3 different swords and the shield with those insect-like mandibles. Include a complete set of decals too.
at August 24, 2016

Kaiyodo certainly has some uncommon stuff made for its older lines of collectibles, but yeah, this mecha from Five Stars Stories stands out as a very rare piece !!!... Indeed, I think that the work of Mamoru Nagano has been neglected in the market of collectibles, with hardly some publications of his exquisite art books and resin/garage kits, that obviously will cost you an arm, a leg and maybe a lung... Well, the guy is quite eccentric as far as I know, but his designs are simply unique and so far I have not seen anything better in the mecha world !!!... =D

>> Chrismandesign
Indeed true that FSS merchandises are limited and I was glad to see Volks brought back the good old days with 1/100 scale FSS model kits.

Never thought that FSS had action figure for it! The series will always had a special place in my heart for having one of the most beautiful designs in Mecha series. One day i will get Bang Doll into my collection once my painting skill is good enough.

>> Yami
I have read your blog and saw a few of your posts on FSS. Can really tell your passion on the manga. Hope you get your Bang soon..

>> Desmond
I just gotten the kit and would likely sell this off.