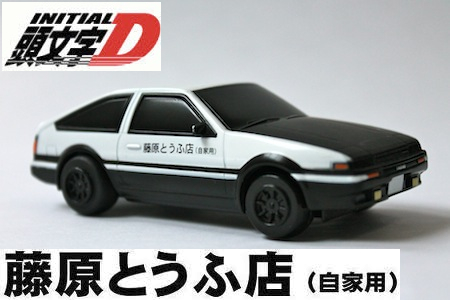 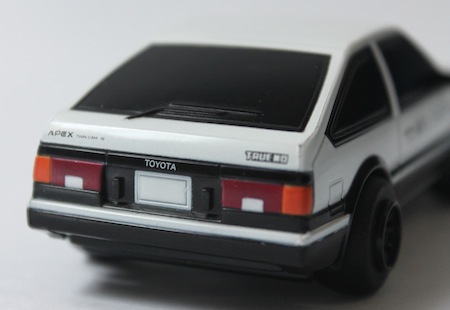 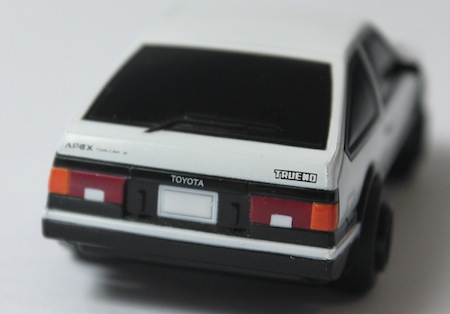 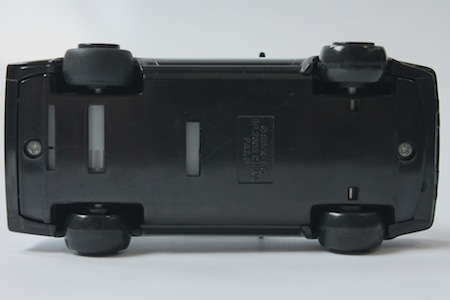 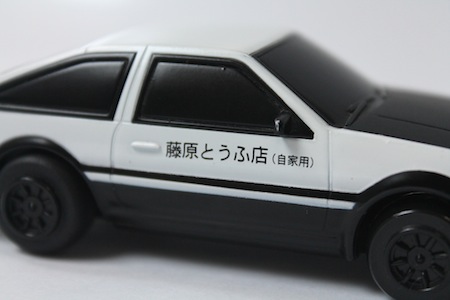 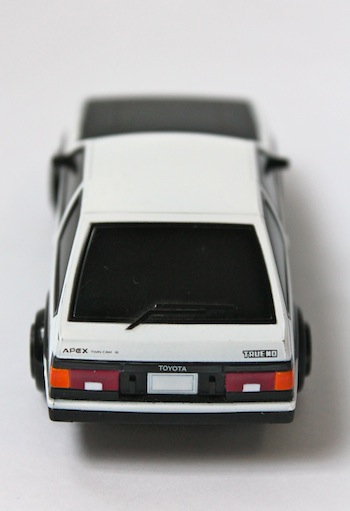 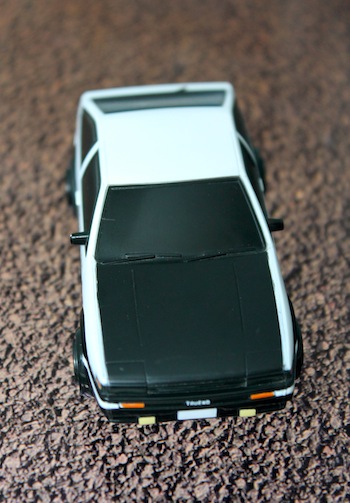 A little souvenir for Desmond which I had bought in Japan as I was strolling along the streets of Akihabara. It is a pre-loved toy sold loose, so I won't tell how the packaging look like. In fact, it's my first time, seeing such an 'Initial D' toy car with pull-back action. It's bigger that regular Hot Wheels car and measured approximately 11cm in length.

My apologies for the limited information on the toy. Perhaps, you guys can fill me in @ comments column. The toy was made mainly of plastic however the paint works ain't too sloppy I guess. I kind of like the name of the tofu shop printed on the right side of Trueno AE86 and wordings on the rear like Toyota, the pride of Japanese car manufacturer.

I am not very much into cars but started watching this anime for the reason that an outclass Trueno AE86 could beat other high performance cars with those skillful drifts and also for those groovy Euro Beat OST. Unfortunately, my interests could not sustain after 2nd stage.

Apart for the anime, I had also watch the live-action movie which Jay Chou acted as Takumi Fujiwara. The movie kind of tell the story from the beginning till where I stopped watching in the anime.  To think that the anime has approached its 20th anniversary is truly remarkable.
at January 25, 2014

Email ThisBlogThis!Share to TwitterShare to FacebookShare to Pinterest
Labels: Friends' Collection, Others

i have seen a resurgence of the interest for certain anime series, at least among the collectors and many brands are taking advantage of this boom... Hot Wheels, for instance, made a tribute model of this AE86 released for the regular series in 2013... AUTOart went beyond with an exquisite diecast replica in 1:18 scale... and now this pullback action vehicle... i’m pretty sure that a fan of the Initial D series, would "kill" for this model... the only thing ugly in this mini-car is the wheels, the rest is quite good, both the mold and the paint/pad printing job... for a preloved collectible looks really nice and in very good condition !!!... =)

P.S. since the japanese sizes are usually smaller than the american sizes, i think that a L size t-shirt would fit me pretty fine (it would be the equivalent to M american size, i guess) LOL =D

Dennis, thanks for your gift from Japan..I am going to get the Autoart 1:18 special edition to be released soon..I also read the final episode of the initial D comic last week..Good news and bad news in the final storyline..

That is an great find as I never would have thought they had a pull back car. The details are quite astonishing with the scale of it.

Just be careful not to break that spring :^)

>> chrismandesign
With Initial D as endorsement, I guess toy makers are confident on AE86 : ) I also think the wheels of this toy car can be better managed.

>> deSMOnd
Look forward to your review once you got your hands on the amazing Autoart 1:18. Share with me the ending the next time we meet ok?

>> bluedrakon
The japs take pride in their car making even toys even candy toy grade such as this.. Awesome...