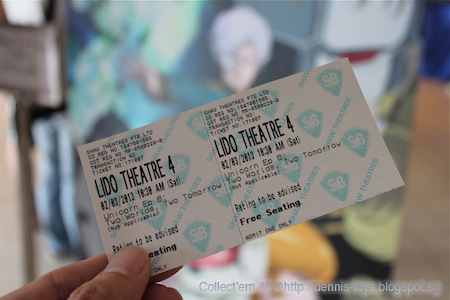 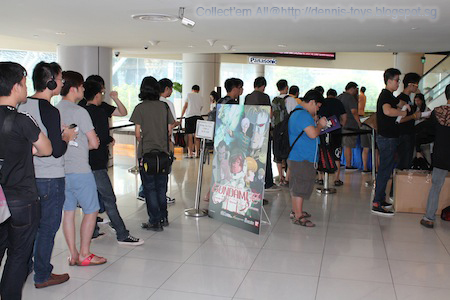 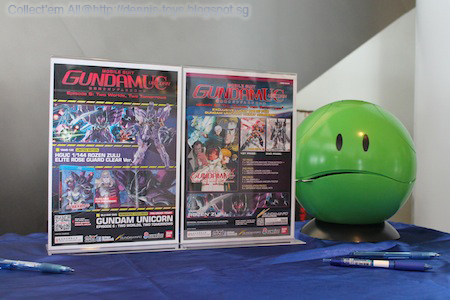 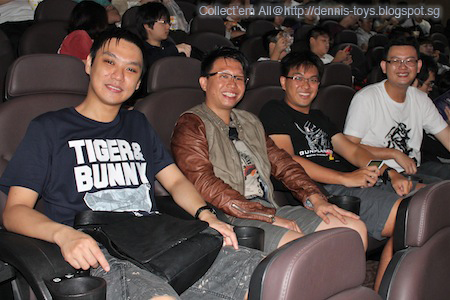 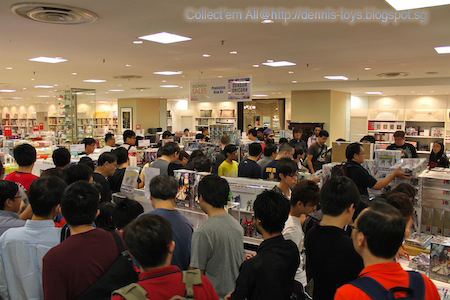 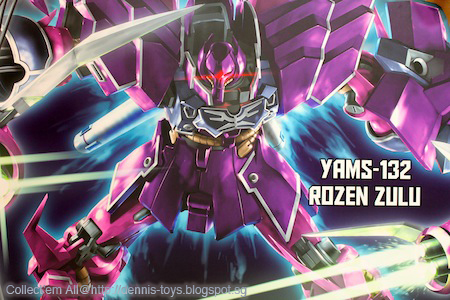 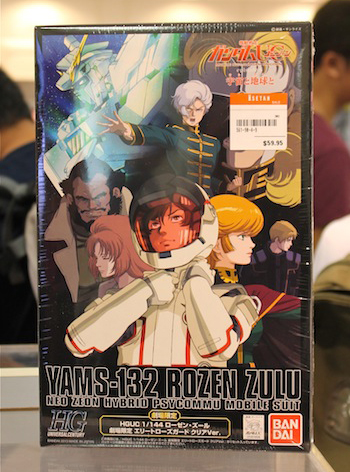 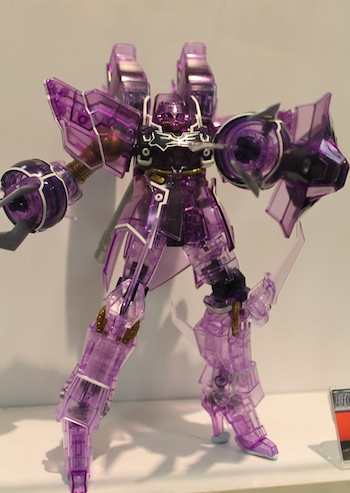 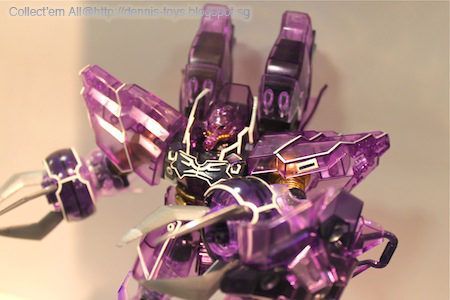 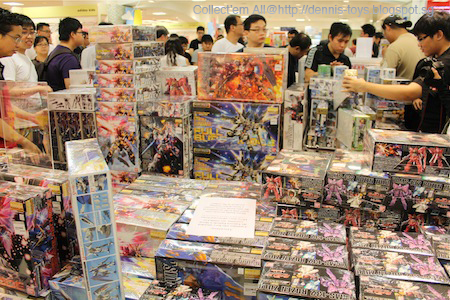 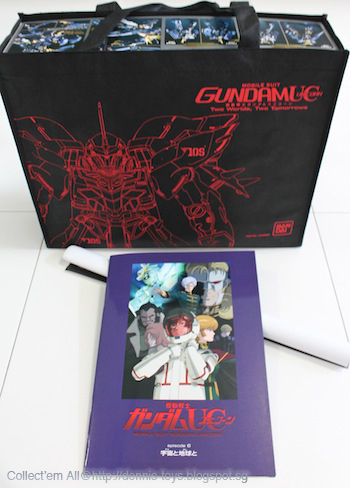 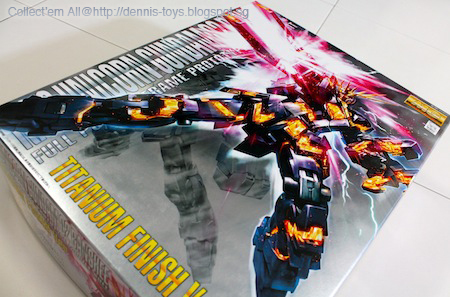 Congratulations to Kenny from our chat-chit group for winning the MG Banshee Titanium Finish version as the grand prize!


What an exciting Saturday morning meeting friends from Gundam chit-chat club and having to watch Unicorn Gundam episode 6 on big screen @ Shaw Lido Orchard. Though the registration supposed to start at 9.30am, a long queue was already formed up 8 plus with eager fans in this highly well responded premiere. After all, it had been a long wait for almost a year.

No spoiler from me, so all I can say, is that this is again another awesome episode. Interestingly good speed up to the storyline, very philosophical and gearing fans up to the 3-way final showdown between Bahnager, Riddhe and Full Frontal! Rozen Zulu had a lot scene appearances this episode and needless to say this MS was inducted as the limited premium in HGUC clear version at the premiere. Premiere attendees were entitled a chance to win Gunpla after the screening and big congratulations to Kenny from our chat-chit group for winning the MG Banshee Titanium Finish version as the grand prize!
at March 02, 2013

You did not buy anything in Isetan then?

Thanks for the invite! Based on my suay luck whereby 30+ yes of life never even win a 4D bay-sai, Im glad someone in my company won 1st prize and I shared the joy as well : )

>> deSMOnd
I didn't buy any Gunpla.. Not until I can clear more of my backlog. Another thing is to save up for my Otaku trip.

>> on_o
Don't be disheartened bro! I'm am in the same league with you my otaku friend! Never been better to invite a friend who like Gundam as much as I do. Enjoy together! Cheers : )

Hurray for Kenny! Lovely Banshee box! I see that you couldn't resist a few pics of it Dennis! hahaha!

nice to see the happy fellowship (and not precisely of the ring LOLOLOLOLOLOL)... i try as well, when the time and work allow it, to enjoy the company of my friends and fellow collectors... it’s pleasant and lets you leave behind the stress of your normal routine... =)

Such luck to get to see the screening and there are so many cool things to get. Hopefully next outing you will get a prize!

nice coverage bro! too bad im too busy to go to te premier, anyways seeing your blog is like being there lols. Congratz to our fellow Kenny! well deserve :)

nice coverage bro! too bad im too busy to go to te premier, anyways seeing your blog is like being there lols. Congratz to our fellow Kenny! well deserve :)

A madam sit behind me get HGUC Rezel C. A japanese fan sit beside me got a Rozen Zulu. And Kenny Eric, sat beside me. every heng heng de LOL!!!

I wish i could go there too and see the episode 6 premiere. Congrats for the grand prize winner, he's so lucky :D

On behalf of the National Library Board (NLB), we would like to invite you to pledge your blog to the Singapore Memory Project as part of efforts to collect memories that are already manifested in existing online channels.

The Singapore Memory Project (SMP) is a national initiative to collect, preserve and provide access to Singapore’s knowledge materials. Spearheaded by NLB, the SMP aims to build a national collection of content in diverse formats (including print, audio and video), to preserve them in digital form, and make them available for discovery and research.

By pledging your blog to SMP, you are affirming that every memory matters. Whether your posts are an account of your daily life, or an expression of your thoughts, the SMP hopes to find a home for your memories so that it can help build towards an understanding of Singapore. You will also receive a badge that you can display on your blog in recognition of your contributions.

Contributors to this blog pledging initiative will be listed on Singapore Memory portal’s blog pledging webpage. All blogs pledged to SMP will archived using NLB’s web harvesting software, in addition to images of each blog’s landing page.

If you are keen to pledge your blog to SMP, simply fill up our response form at this following URL: http://singaporememory.simulation.com.sg/Public/Pledge.

You may find out more about this initiative at http://www.iremember.sg/?page_id=2822.

We are looking forward to your contribution.

>> Eric
Nice meeting up again mate for this meaningful event as I had left early the first time we met due to having to work commitments. Indeed, the box of titanium Banshee is hard to resist taking a pic!

>> chrismandesign
Yes pal, I really benefitted a lot from this worthy fellowship and met very nice comrade especially Stanley, Kenny and Weixian! Can't believed that I'm even going on an otaku trip to Japan with Stanley!

>> bluedrakon
Thank you for the well wishes! Even though I didn't win any prize, watching the screening already is a big bonus.

>> arvinangeles2012
Awesome that you dropped by my blog bro! You are always the sunshine in our chat group and genius in customizing!

>> Stanley
Maybe you are their catalyst to winning the prizes. We can go Japan and whack more gundam stuff! Next stop Tokyo Gundam Front!!!!

>> Om3ga062012
True that having to be invited for the screening is already a lucky thing! I hope you will get your chance really soon someday!