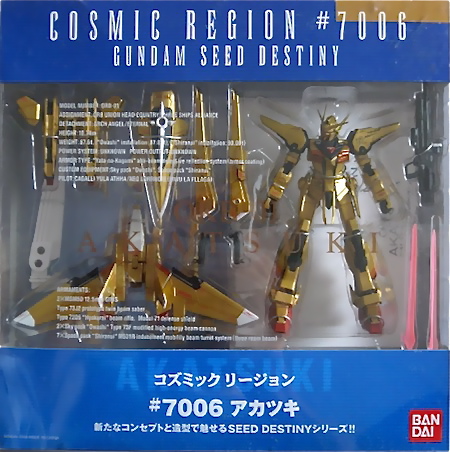 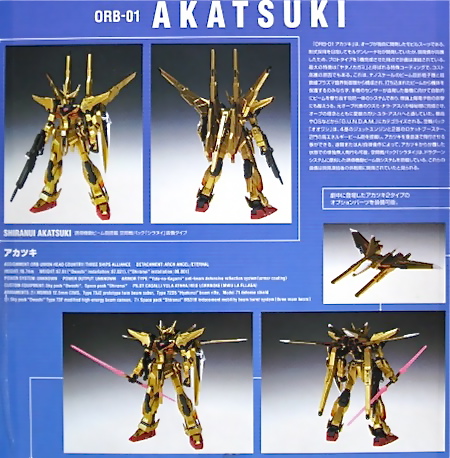 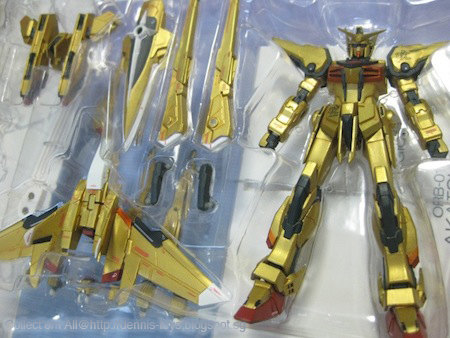 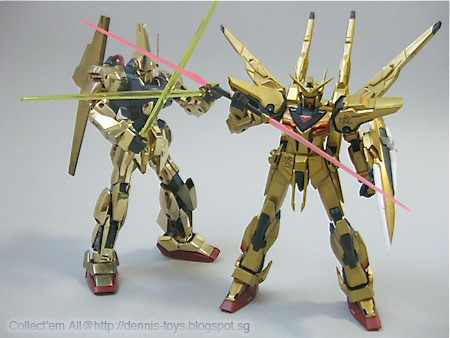 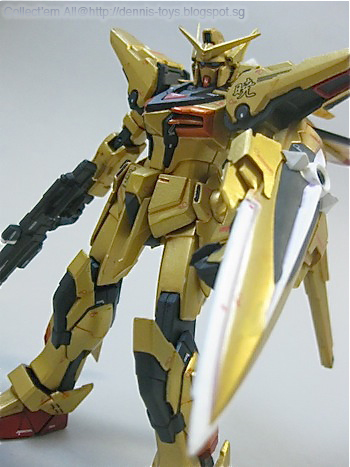 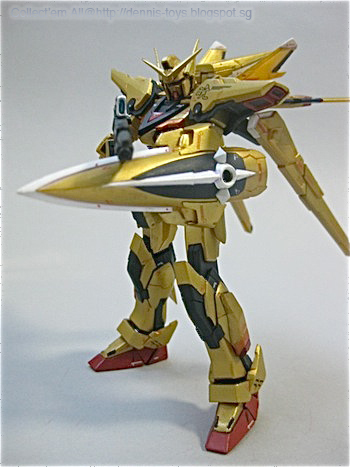 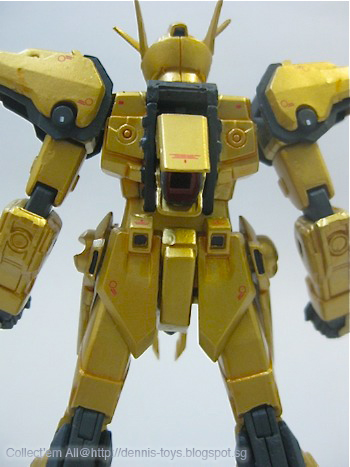 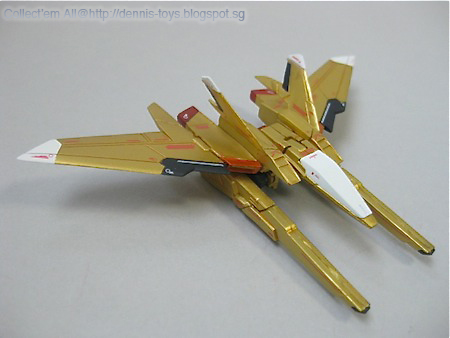 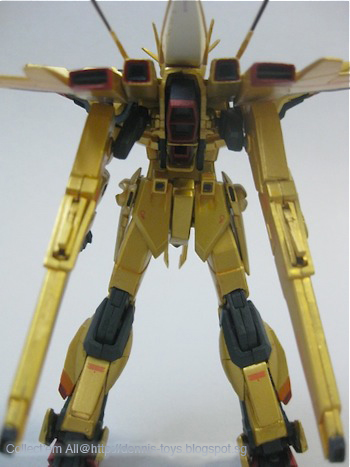 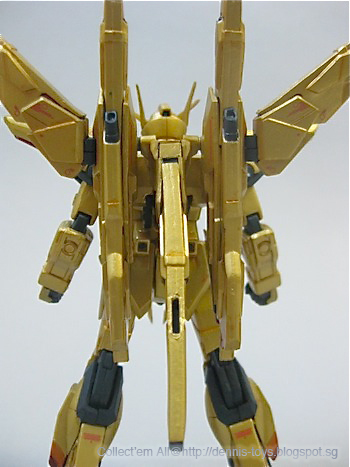 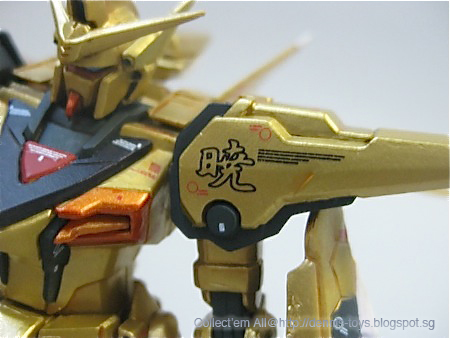 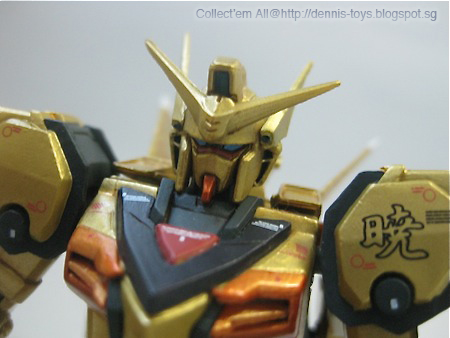 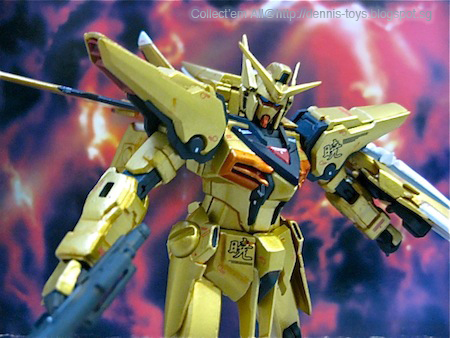 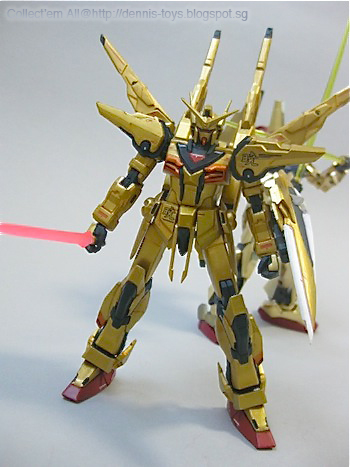 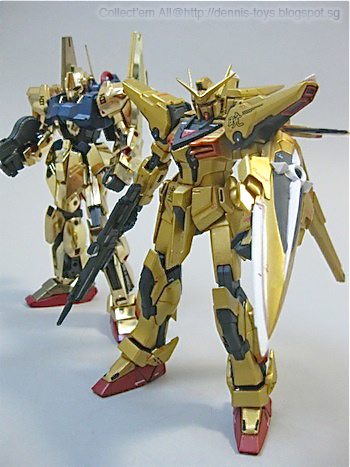 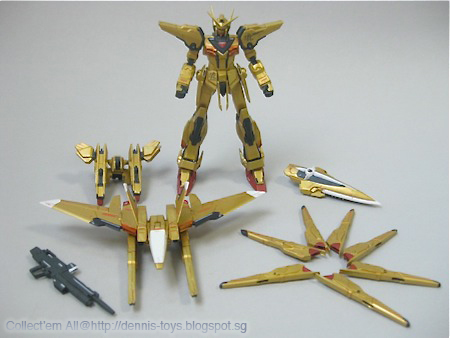 A little special for GFF that's outside of UC timeline under Cosmic Region with lucky serial number #7006. Akatsuki ORB-01 like the model number suggested is the most advanced, so as to say the most powerful MS by Orb, built under secrecy. It made its appearance in the anime series 'Gundam Seed Destiny' as a guardian MS presented to Cagalli Yula Atha and then piloted by Mu La Flaga with the spectacular rescue of Archangel from been destroyed by mega beam burst. It was able to do it with the gold plating of the MS that's virtually impervious to beam attacks contributed by the beam-deflecting coat. Kind of like the same concept used previously by MSN-00100 Hyaku Shiki, in 'Mobile Suit Zeta Gundam'.

In GFF form, I believed this highly detailed action figure was made to regular 1/144 scale. For the supposedly gold plated MS look less impressive with a matt finish. The accessories are pretty complete with 'Oowashi' sky pack and 'Shiranui' space pack apart from the standard issued rifle, saber and shield. The figure was also complimented with display stand. The thing I like about this figure would be the Japanese character printed on the left shoulder and front right skirt. Like most the GFF, the major flaw of GFF is the lack of articulation and looking the toy at close-up, you could still see the molding seam lines and some unevenly painted areas

Didn't know there was another gold MS, but my Gundam Seed knowledge is nil.

Very nice looking MS, heard that these gundamfix figures are quite expensive and sort after.

This should be the second golden MS unless we concern the fired up God and Shining Gundam as well. If you interested in the kit, I think Bandai did released the 1/144 and 1/100 HG version. GFF was once very popular and yes the released prices were pretty high taking into consideration the detailing and accessories thrown in. Well, the production had slowed down with Robot Damashii taking over the limelight.

now that i know that these figures are expensive i would think twince into buy one of them considering that the model kit is much, much better... mine has the golden plate finish which is more accurate to the series and looks awesome, however this figure you’re publishing has the sky pack which is not available, at least in the 1/144 scale... if i’m not wrong, the metal composite is the top of the line in Gundam figures, but i’m not sure if this Akatsuki is available... =)

I don't like the use of gold on the figures as it seems never to look right. I would rather see the gold foil than paint on them, however, I am sure the foil would eventually fall off :_(

Many Seed Destiny fans love the Akatsuki - maybe because of the charisma of the 2nd pilot (Mu La Flaga). Your complain about the lack of articulation is true because the main emphasis for Katoki Hajime and team when they worked on the GFF models is purely aesthetic appearance - looks cool. As for the fault on paint job or seamless lines, oh well, this is a mass produce items made in China, so shit happens sometimes. My only complain is that after several years, I need to use white glue to make sure the funnel of Owashi pack does not fall down often... sigh

Not get used to it seeing Gundam in Gold...

>> Chrismandesign
I would also prefer the model kits of Akatsuki especially the 1/100 scale, which is now high sought and had appreciated in pricing after a decade. Agreed to that the model kit comes in a more shiny coat of gold. Have you poison me of buying the model kit. The top range of Gundam toy should be GFF metal composite. The Freedom Gundam is priced around 200 Singapore dollars.

>> bluedrakon
Yup! Bandai got it wrong this round on the paint for GFF Akatsuki. It began to question why I bought it in the first place and sold it off after reviewing it. Hee! Hee! Going for the model kit like Chris suggest would be a better choice.

>> David John Shewsbury
I have a MG Hyaku Shiki and having a 1/100 Akatsuki display beside would be awesome too! So you have this GFF as well. I also think Mu La Flaga is a great character in Seed. I was a bit sad when he sacrificed using Strike Gundam to shield the beam attack in the first season and was so delighted that he survived and repeated the same in season 2 in a stylish way. Awesome! You are right abt the sole purpose of GFF not for the articulation. Kind of like Gundam Standart with those details but fix pose.

>> deSMOnd
Sunrise and Bandai are always trying out new concept on mobile suits whereby some might gain instant popularity and some would just flob like the Turn-A Gundam in my opinion. Akatsuki could be a late bloom. It's on the safe side as many take reference of it to Hyaku Shiki.

One of my favorite gundam, too bad Bandai has not made the MG version yet. I prefer the Shiranui backpack, looks cool :)

gundam with a COOL factor in gundam seed. and of cos with a charismatic pilot, sweetttttttttttttt. HAHAHAHA

>> Om3ga062012
High chance Bandai would release an MG for Akatsuki I think, now that the Gundam in Seed are gradually honored with MG treatment. Actually the HG 1/100 Gunpla of Akatsuki is already pretty cool with nice chrome. It's the chrome coating that making the kit price highly than average MG.

>> sl619
Got to agreed that how the MS and its pilot was portrayed in the anime determined the success and its popularity. Akatsuki sure is a one up side cast being remembered for its unique attributes.