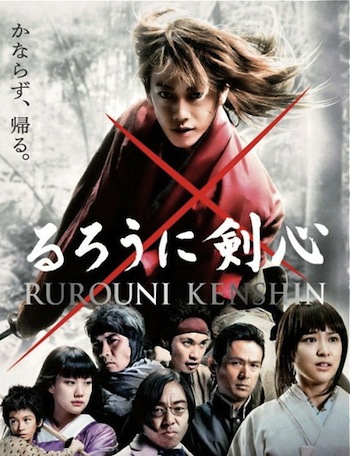 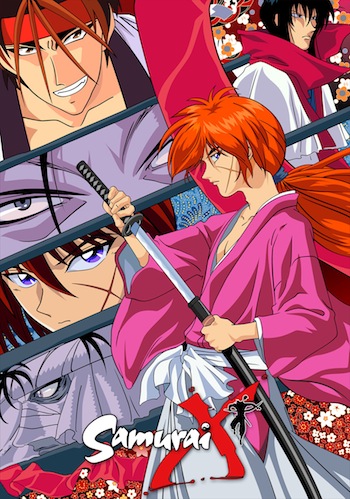 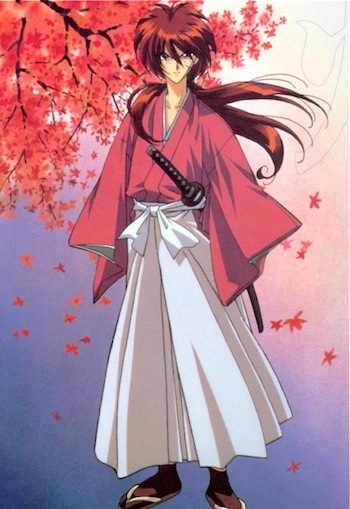 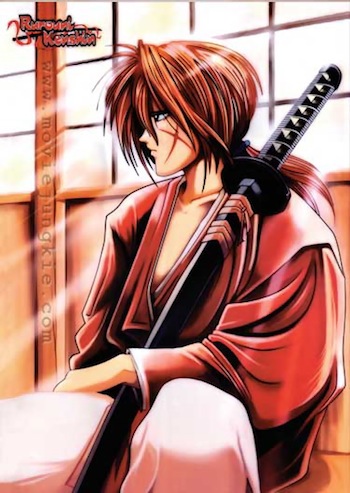 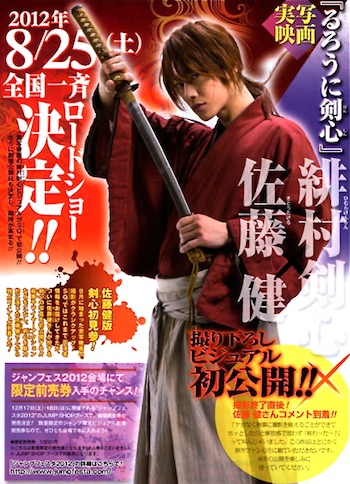 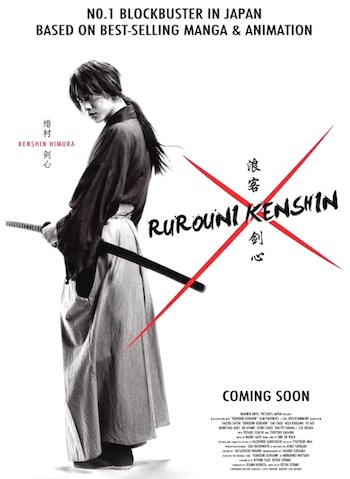 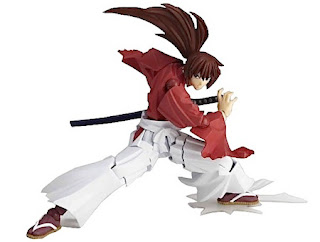 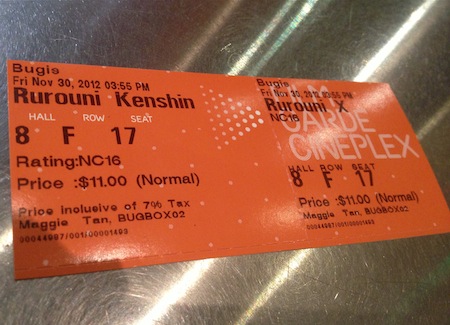 Rather than a review, I would regard this post more of a personal thoughts of Rurouni Kenshin Live Action Movie 2012, penned just 30 minutes after watching the movie and listening to 'Heart of Sword' by T.M. Revolution (OST from the anime), on my journey home. What a long wait to finally watch the live action movie after more than a decade. To be precise, the anime is celebrating its 15th anniversary.  Still remember watching the anime on VCD in Cantonese dialogue and Willie was the friend who lent me the VCD box-set. We were hot-blooded young adults then and ungraded to daddy class or uncle category now.

Watching this live action movie had brought back familiar feeling and that rusty sensation I once had for the anime. Strongly urged by Mr 'K' and Guy 'A' to watch the movie and thanx to them, I had truly enjoyed the movie. Guy 'A' had told me about his romantic true-life-story related to the anime that his girlfriend, who don't fancy anime, actually sat beside him to watch the entire 95 episodes.

On the hand, Mr 'K' was so crazy about the anime previously that he bought the code 1 DVD anime box-set that didn't come easy years back and of course the reverse bladed replica sword of Kenshin. Mr 'K' had so very much wanted to watch the live action movie that he had recently texted me to find out more details on the movie roadshow at AFA 2012 and released date.

The debut of Rurouni Kenshin Live Action 2012 in Singapore is certainly niche and off the mainstream, only showing @ 2 cinemas, Filmgarde Bugis and Kallang. An awesome adaption to the based on the highly successful and acclaimed manga and anime, widely known as 'Samurai X' in America.

Definitely a different and better movie experience hearing the grasping of fans in the cinema during the scene, Takaru Satoh (who also acted in Mask Rider Den-O) donned the red and white samurai robe and applauds when the movie ended. In addition, Takaru Satoh fitted the role well and his co-star Emi Takei as Kaoru Kamiya, really are super kawaii in the movie. Mr 'K', you have requested for this post and here it is.
at November 30, 2012

What can I say, this movie was simply epic right down to its casting, pacing and the superb fighting scenes. The film-makers did a great job streamlining the first 30 eps or so into a single movie and it was 2 hrs-plus of pure enjoyment. And yes, as you rightly mentioned, the show brought back many a great personal memories as well : )

Yes bro, certainly a movie adaption that has been close and true to its anime. Like you mentioned, good pacing and fighting + comical scenes along the way. Strong casts from veteran actors to the young ones. Good movie that had my attention throughout. I guess for a Kenshin like you, it even more meaningful. Thx for introducing the movie to me! Cheers!

Oh..the actor who played Kenshin is the one played Den-O Liner Kamen Rider..Looks like the film is good..you must be enjoyed the whole show :)

Oh yes, truly enjoyable and the actor of Kenshin captured the character well with a touch of humour. I guess it's how he added humour to Den-O as well. Give it a try bro, it nice even for non-follower of the anime/manga.

i watched a series (not sure if it was the regular series or an OVA) not so long ago, so Kenshin is quite familiar for me yet and it reminds me as well of another great series: Basilisk... for your comments i guess the movie is a faithful homage to the anime (which is a great challenge actually)... it must be in my anime queue !!! =D

I think Samurai X was previously shown on AXN but it was years ago. Cool that the anime is no stranger to you and thank you for recommendation of Basilisk. I watched the trailer on YouTube and it quite a cool samurai genre anime.

No wonder the actor looks so familiar! I have the same experience watching it in Canto as well in the pass. But the prob is I dont understand most of it and I cant read mandarin. HAHAHA! (Re-watched with Eng subs though. =p)

Definitely will buy the DVD to watch as Msia wont be screening. =(

I was telling a friend about the cantonese dialogue version I watched previously and he lol when heard me pronouncing Battosai in cantonese! Iike you, I don't quite understand Cantonese cos I'm hokkian and Mandarin has always been my weakness subject. I had since rewatched a lot of anime in English sub. Just for info, I heard the DVD of this movie would be released 26th Dec 2012.

watched all the animes episodes and movies, can't wait for it to reach the malaysian shores!!!

Now, you make it feel like rewatching the entire anime series again. Hope you manage to catch it on big screen at a cinema near you. Cheers!