Lord of the Ring DVD 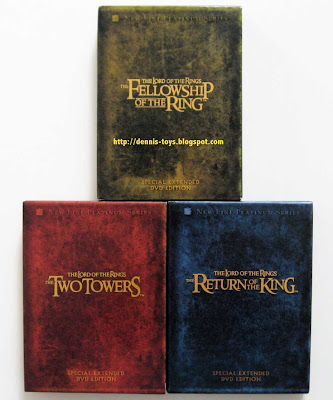 A collection of my LOTR code 1 DVD 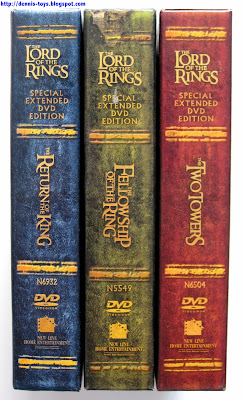 Special Extended version of LOTR
Never before have I watched a knight fantasy movie as good as ‘Lord of the Ring’. The effort, time and budget spent making this movie is more than words to describe Peter Jack’s sincerity to fans of knight fantasy out there.

The first part of the trilogy to me was a typical ‘Dungeon & Dragon’ plot but what impress me most were the sequels when humans, elves, hobbits and dwarves pledged to protect their kingdoms. The armors donned by elves and human knights were simply awesome! The use of CG in the movie is almost flawless and battle scenes on the alliance facing the overwhelming foes were just spectacular. So much so that I never get tired showing it over and over again. The extended version also had given me extra viewing pleasure and good run for my money. It’s just like watching a mini series.

Last but not least, you can view Adrian's blog 'Little Plastic Man' for some LOTR toy review.
Totally awesome when you put LOTR & Manowar's song together...

hey i had this 3 box set too. Now i was reminded, wanted to watch again. hehehe

I have these three sets as well. The bonus materials are really good, especially the introduction on all the weapons made and used. My favorite part ^^