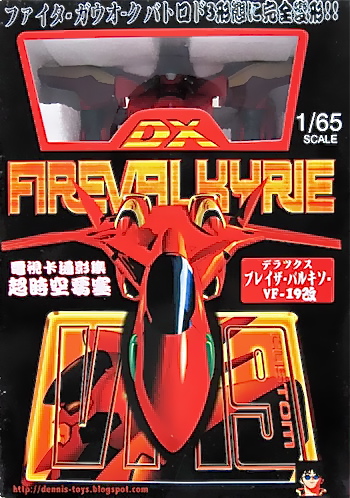 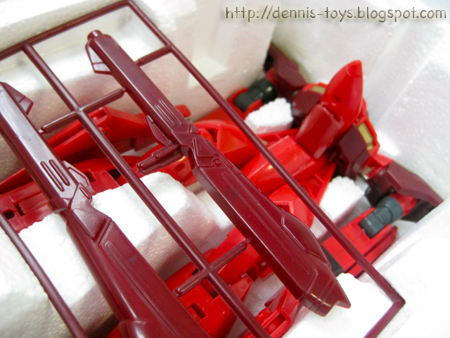 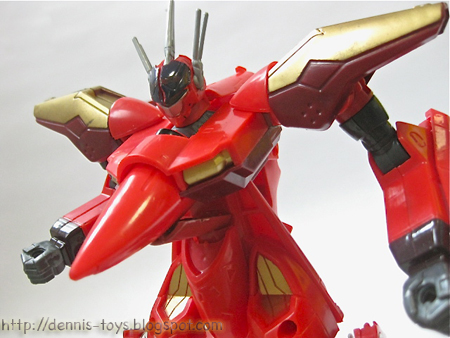 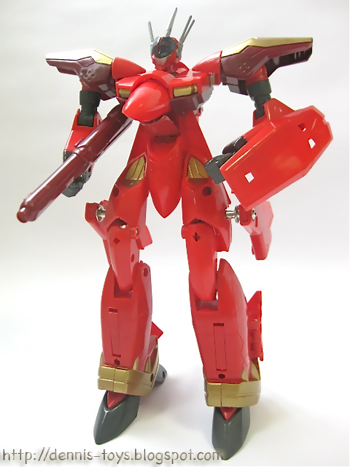 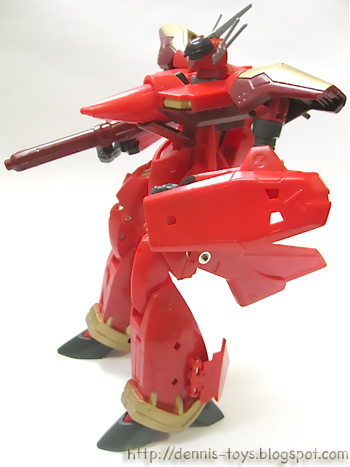 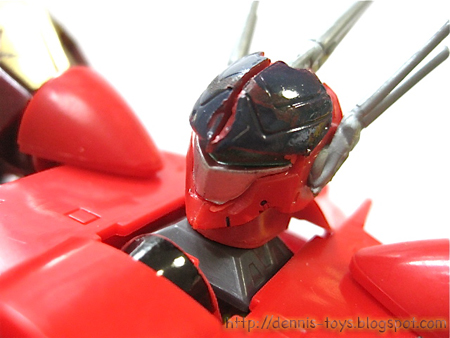 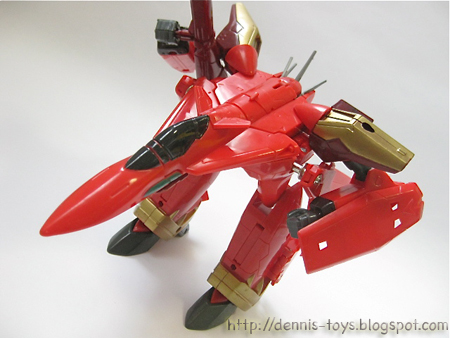 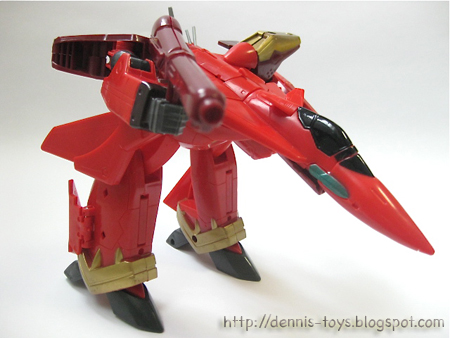 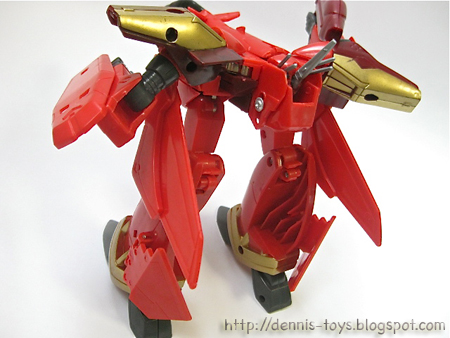 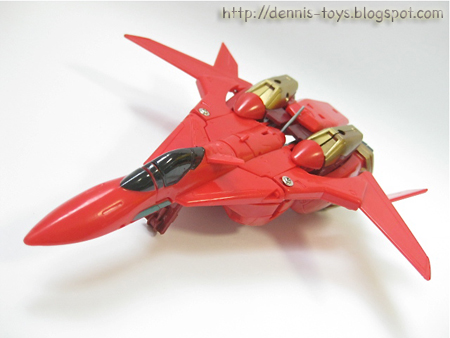 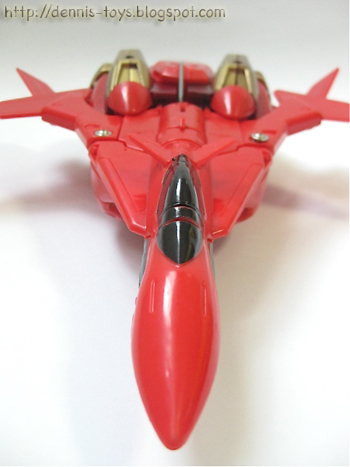 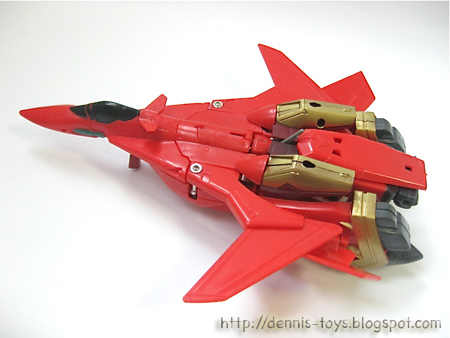 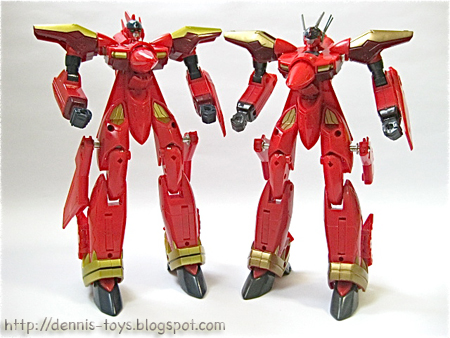 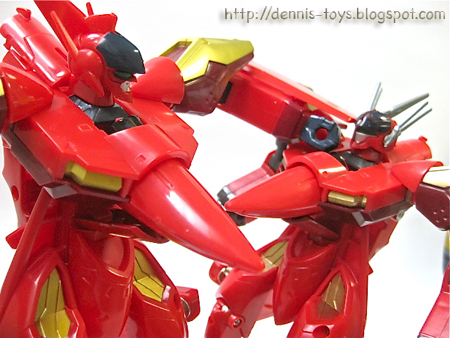 I'm going to do a series of repost of my 1/65 scale Macross 7 valkyries as they were been blogged ages ago when I started blogging. I would consider this as a way to upgrade the posts with newer photos and   more views/opinions on the toy. I'll start off with this replicate of Bandai's 1/65 Fire Valkyrie VF-19 Custom aka Fire Valkyrie. The packaging of the bootleg is almost identical to the one made by Bandai except that the Bandai logo that's supposedly at bottom right, had been replaced by the face of Basara Nekki. When you opened the box, you would noticed that the toy rest nicely on styrofoam insert with weapon still on tree, presented just like the original.

The whole toy looked generally decent from a distance but on close up, those bootleggers made a terrible mistake by replacing a wrong head that actually belonged to VF-19S (Special) aka Blazevalkyrie. Upon further checking, I also discovered a dent on the forehead which indicated poor QC. The quality plastic and metal component didn't seem too bad even though it was still inferior to the original. I have no issues on its transformation as it was quite an ease. Some compliments for a bootleg that comes with box, instruction manual, weapon on tree and joints with metal component.
at October 03, 2011

It never ceases to amaze me amount of time they place in copying the box so as to fool you.

This was a fair representation of the figure with the obvious wrong stuff. But of course, you would never of gauged that looking at the figure on the shelf.

Well said pal, no matter how it was presented, it could never match the original. Furthermore, it has got no resale value. I'm now trying to get rid of it at a dirt cheap price. Initially, I bought it as a comparison with original, now with collection expanding, I realized it's take up space.

from the pics, this bootleg actually looks good! haha. I hv a feeling this is made to actually con a person which hv lesser knowledge. hehe

Actually, the bootleg as a whole isn't too bad. In the passed, I like to collect anything related to Macross irregardless original or bootleg. Now, I'm more selective .

Ha! Ha! They were made mainly by plastic. Not Gundam, so didn't use matt spray. Lol...

Haha Dennis, I might use the bootleg for modifications hehe. But the quality seems quite alright from the pictures even though its looking at you with a wrong head haha.

Although the protesters spent a month,Christian Louboutin Wedges a more difficult test still to come. Reporters noted that Zuke Ti high-rise buildings all around the park, usually difficult to trace exposure into the sun.Christian Louboutin Boots When late autumn, the wind gradually, the park feel more cold. Demonstrators called for public donations of clothing, to help people who insist on sleeping in the winter. This reporter saw demonstrators have been filled with clothing collected a number of large boxes, but most dilapidated.On-site volunteersChristian Louboutin Ankle Boots are busy cleaning up clothes, told reporters that they had collected a lot of old sweaters, pants and so old, but still with the lack of winter shoes and blankets. He said, are trying to raise more Christian Louboutin Peep toe Bootiescold material."Occupation of Wall Street" demonstration has so far raised $ 300,000, which is not a protest demonstration in terms of a small number. Protesters do not seem to meet, set up in the park aChristian Louboutin Over Knee Boots lot of donation boxes, calling people for donations.