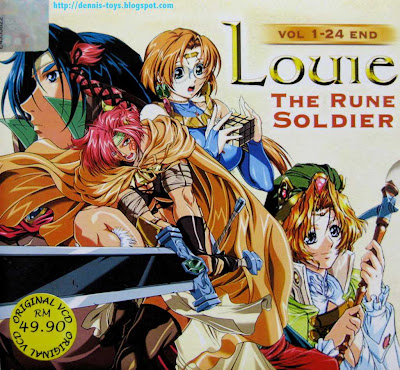 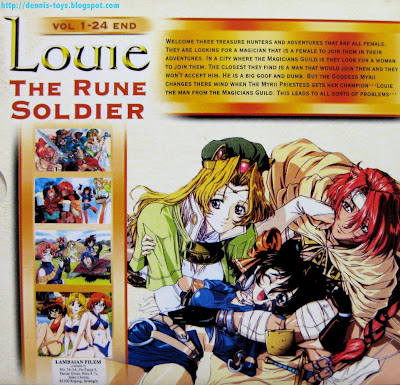 Back cover of boxset

Inside of boxset
Sorry for the slow posting cos I'm held up with work commitments lately. There's an animation on knight fantasy that I would like to recommend. I got this VCD box set in KL two three years back during my last visit to KL Malaysia. Good thing about this VCD is that it is both Japanese and English dubbed.

I would say it is a comically funny anime which talks about a mage (Louie) who used more brawl than brain while on his adventure with three ladies (cleric, warrior & thief). It's hilarious and sure to give you a lot of laughter from episodes 1- 24. Thinking of getting the original code 1 DVD. Ha! Ha!
Movie description:
Created by Ryo Mizuno (RECORD OF LODOSS WAR), the well-pedigreed anime television series RUNE SOLDIER injects a playful war between the sexes into its irreverent fantasy-comedy hybrid. Three superpowered women--martial artist Genie, priestess Melissa, and master thief Merrill--make their living raiding treasures from ancient ruins. When the trio set their sights on a ruin guarded by a magic seal, they decide to hire an experienced female magician but end up with a clumsy male novice named Louie. Saddled with this inept newcomer, the newly minted quartet embark on treasure-seeking adventures that dip into slapstick territory without losing any of their fantastical elements. Funny and action-packed, the anime series is presented in its entirety with this 24-episode collection.
Louie The Rune Soldier opening...
at October 26, 2008