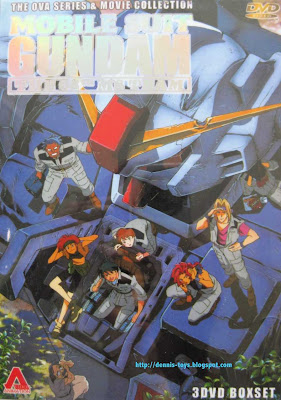 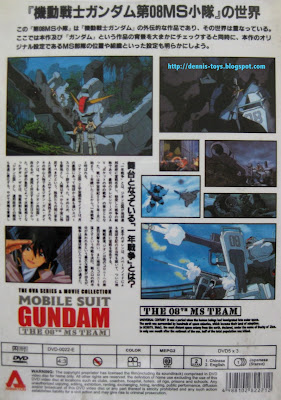 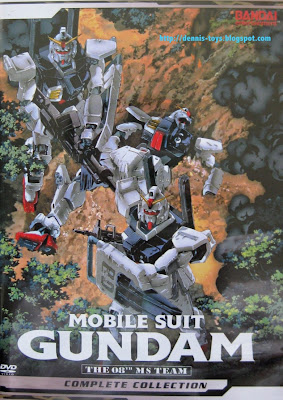 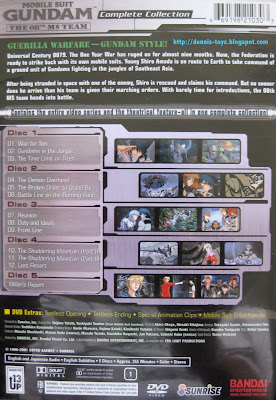 Back view of code 1 version boxset 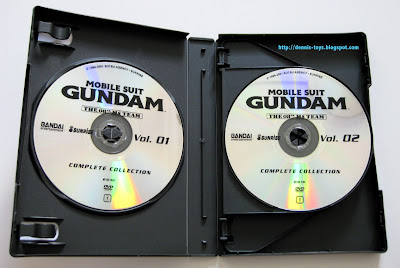 Content of code 1 version boxset
This Gundam anime is worth watching again and again which I think it is classic Gundam anime. Gundam anime nowadays which comes with fanciful and super duper power. This anime tells a lot about teamwork, sacrifice, courage and love. It's realistic and the strategic in battle is intriguing.

Not all would share the same sentiment as me especially those who know Gundam through Gundam Seed onwards cos Haro told me this anime is too old and had returned the DVD back to me after having watched only a few episodes. Sad!

Anime description (I got from Ebay):
Anime's most popular and enduring series continues with MOBILE SUIT GUNDAM: THE 8TH MS TEAM. In the midst of the One Year War between the Federation and the Zeons, Shiro Amada has been placed in charge of a squadron of prototype Gundam suits used for ground combat. As the squadron has a series of deadly encounters with the Zeons, they come to learn that the terrain and their malfunctioning can be just as dangerous as their enemies. But little do they realize that the greatest threat may come from a betrayal within, as their leader Shiro has fallen in love with Aina Sahalin, an enemy pilot. THE 8TH MS TEAM is a grittier, more realistic GUNDAM series that concentrates on the harsh conditions of battle, reminiscent of a war film rather than the STAR WARS style action of the other entries. This COLLECTORS EDITION BOX SET contains all twelve episodes collected on five discs.
at October 29, 2008