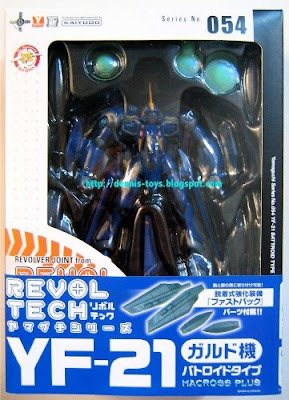 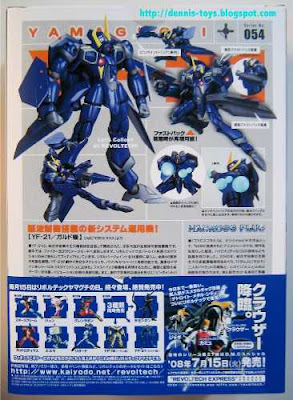 Back view of box
Still in the mood of Macross Plus so I decided to blog on my Kaiyodo Revoltech Macross Plus YF-21. The test pilot of YF-21 is Guld Goa Bowman, one half human and half Zentradi. BRevoltech YF-21 was released after the success of Patlabor, Macross, Transformers & Mazinger figurines. The figurine is highly detailed and it able to be posed in many ways, just like those cool poses you see in the anime.

Before Revoltech series were introduced, Kaiyodo had been very sucessful producing anime character figurines. Because of Revoltechnology, Kaiyodo had set robotic figurines standard to a new height.

Email ThisBlogThis!Share to TwitterShare to FacebookShare to Pinterest
Labels: Macross, Macross Plus, Revoltech