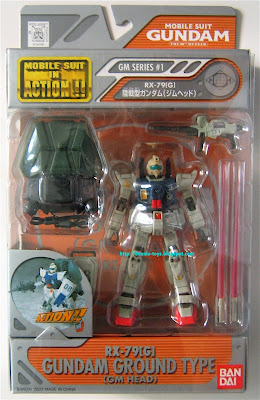 The front cover of box 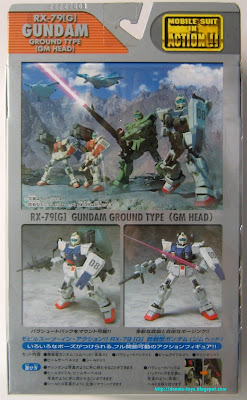 The back cover of box
Another of my MSIA from Gundam 08th Team in MISB condition. Here's a RX79(G) Gundam Ground Type replaced by a GM Head. Karen Joshua's Gundam head was decapitated by Acguy shortly after she parachute landed. What to do! The Feddies could not find another Gundam head, so temporarily used a misfit GM head on Gundam chassis. The pilot Karen Joshua was also been teased over the ordeal.

Bandai had an easy job of producing this MSIA, using existing MSIA GM head and Gundam Gundam and putting the parts together. The novelty I think would be just the parachute pack.
Ordeal by the lake...