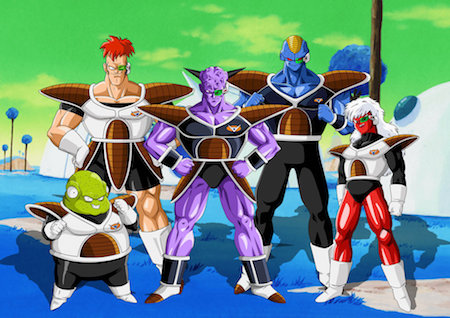 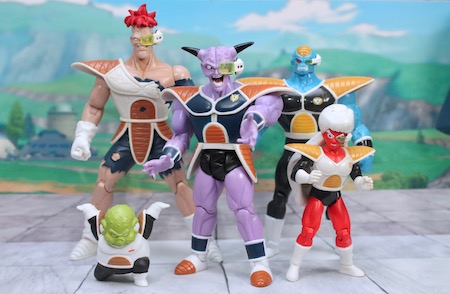 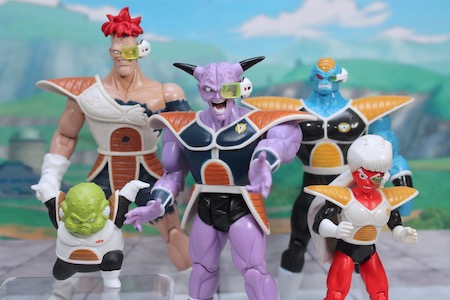 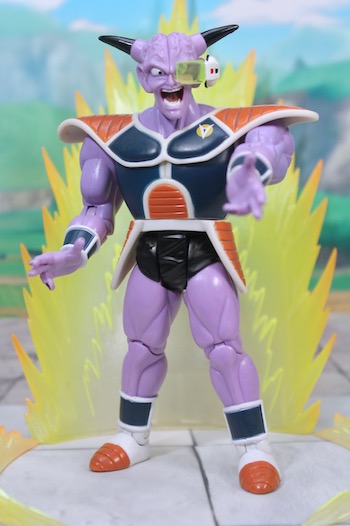 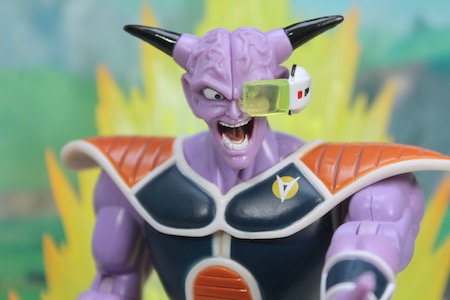 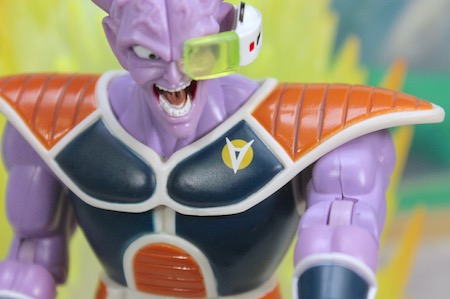 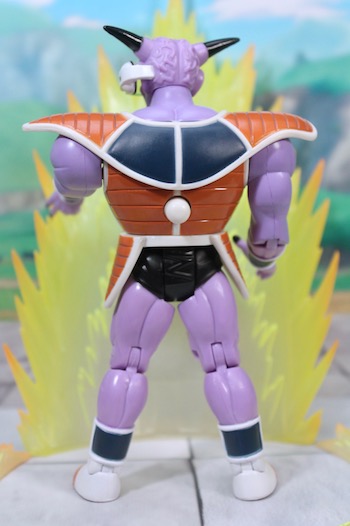 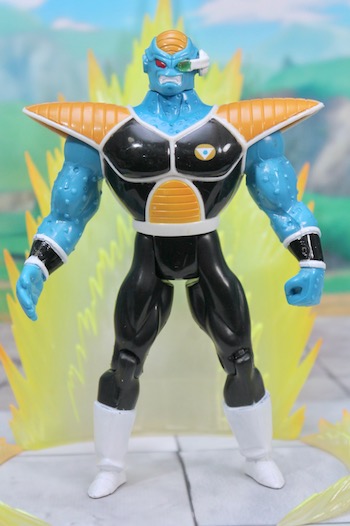 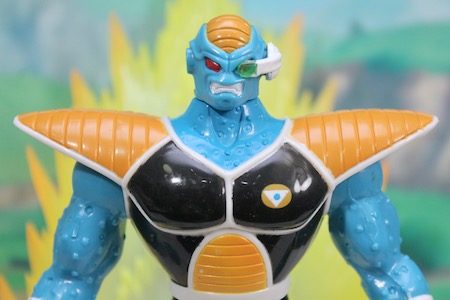 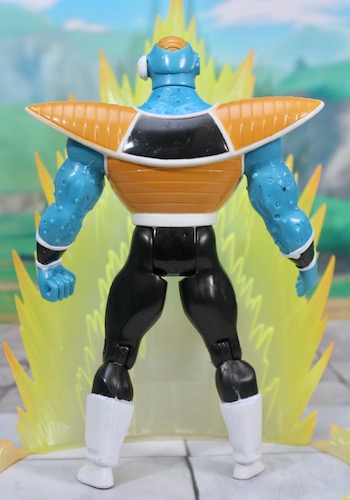 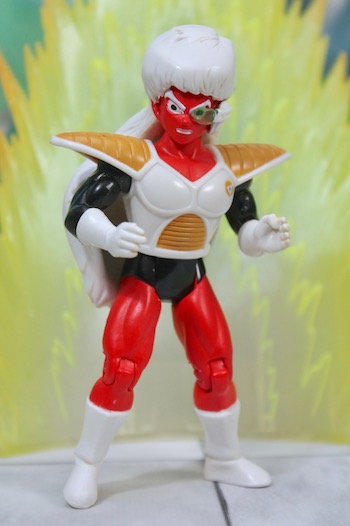 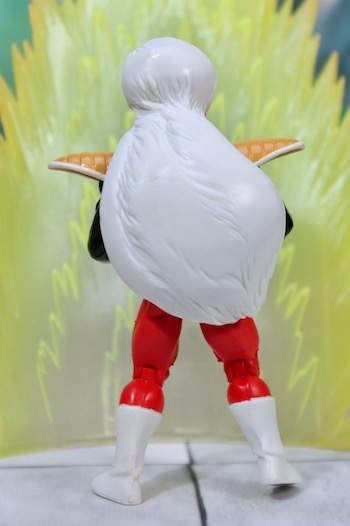 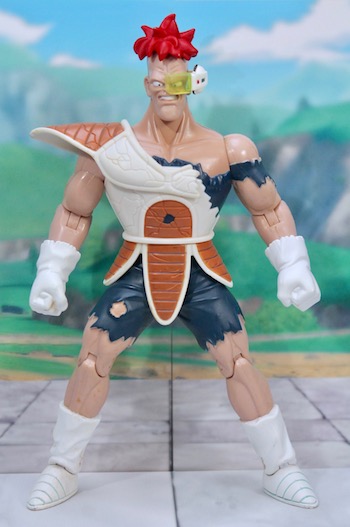 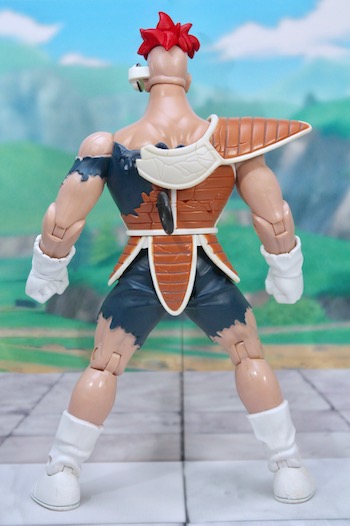 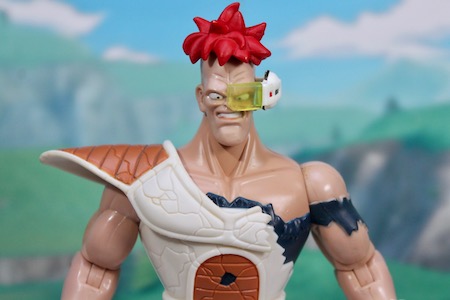 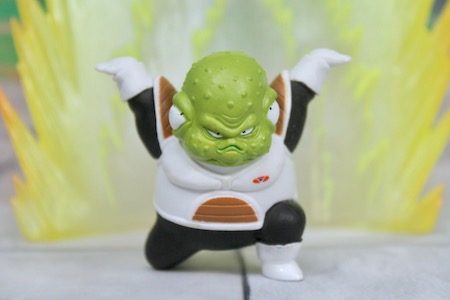 Tribute to Ginyu Force ギニュー特戦隊 (Recoome, Burter, Jeice, Guldo, and Captain Ginyu)! Game over for an elite team of mercenaries who serve Frieza in Dragon Ball DBZ. These are my old collection when there were so few highly durable 6" figures of these characters available in Asia market except for gashapons.

The big and most human looking dude with that insane look Recoome action figure in battle damaged armour (half his armor blown off of his shoulder) is by Jakks Pacific in 2003 and incredibly hard to find back then and most costly among the rest. It has a ring on the rear and once pulled back and released, its arm would swing back and forth. This figure is big and cool despite taller than Burter which shouldn't be the case.

Here comes 6" Captain Ginyu with horns and purple skin! This also by Jakks Pacific and some obvious trends of Jakks Pacifi, in this DBZ are that the saiyan armours made of rubber material and they have better articulation like the elbow and kneel joints. Ginyu figure has a knob on the rear and pushing it triggered a arm slashing/ swinging motion. Ginyu has a yearning expression and he probably looks more crazy than evil. Lolz...

The tallest and fastest member of Ginyu Force Burter, fish head with blue skin, released in 2000 by Irwin, others included in the same set is Jeice. Stands approximately 5" so its smaller in comparison with Recoome figure. This figure maintains a chop motion with one arm and a tight fist with the other. This is likely Burter’s overall stance prior to attacking his opponent and being in a prepared combat positioning.

Jeice action figure is 4.5" also by Irwin, dyed his hair white and paint his skin red.... He is fairly similar to Yamcha with the long hair and skills as well. The long hair in plastic posed a problem to the stability, still he the figure managed to hold up on its own. The problems with these action figures are the inconsistence paint works and the eye pupils seems off which make them kind of weird. In my journey of collection Ginyu Force Action Figures back then, the closest

Guildo figure that could fit in was WCF Guildo which I had mine knockoff. All figures come with optional scouter, which is also modeled to as headgears equip onto their head, allowing them to scan for opponent's power. Ginyu Force Rules!!!! Excellent for play and pose!!!

Jakks Pacific managed to create some very good figures from different franchises, Dragon Ball seems to be one sought after and I understand why: these figures look sturdy, nicely sculpted and painted, maybe a bit basic in terms of articulation, but their playability is definitely their strength... I have not heard about Irwin though... I don’t know you pal, but I feel the Ginyu Force was funny inclusion in the Dragon Ball Z Series, rather than an actual menace for the Z warriors and I think that’s great, because humor is a big part of this franchise !!!... =D

Rare man! If S.H.Figuarts sell these they may suffer lost due to the price. LOL But they may in some day. Gold freeza 1st.

>> Chrismandesign
Strongly agrees that the strength of these figures are their playability though they may not likely captures how the characters look in the anime. It’s really good to have and great to laugh at how funny they are.

>> Leon
If they inducted to S.H.Figuarts, one of them would surely be exclusive to make us pay more in order to complete. Lolz.

These figures look great when on display side by side :)