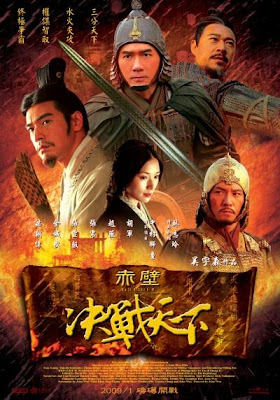 Just watch the part 2 of Red Cliff the other day and had enjoyed the cinematic experience watcihng @ GV Vivo. The high US$80million budget of John Woo's Red Cliff sure contributed to the spectacular battle scenes and artifacts. The 2 1/2 hours movie duration makes the money spent very worthwhile but if you don't enjoy the movie, it probably bore you to sleep. Ha! Ha!

I like the dialogue as they are pretty humourous. The funniest part to me would be Zhangfei making the huge glutinous riceball. I fancy battle scenes and John Woo didn't disappoint me on that. It just that the fireball from the catapult seems too explosive in the movie, which shouldn't be the case during that era. A certain points of the battle, it suddenly reminds me of 'Windtalker'. Typical style of John Woo's war movies.

It is just a movie I don't argue between fact and fiction. Red Cliff is enjoyable but in my opinion, Ip Man is still my first choice among recent movies I watched. I have a strong feeling the there would sure be a collector's edition DVD release in the near future. The dvd will be in my wishlist.
at January 16, 2009