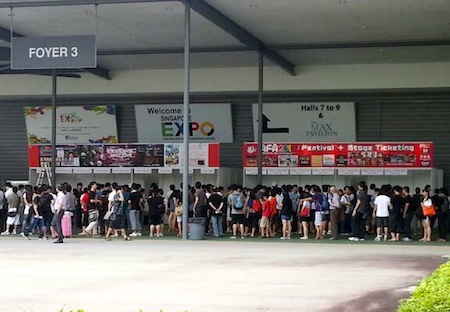 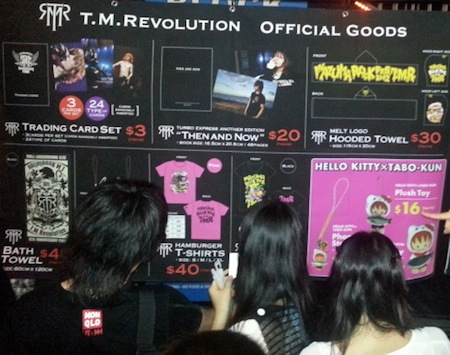 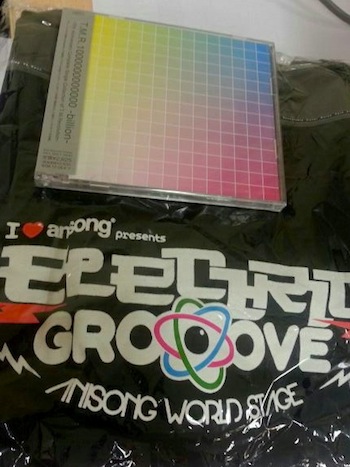 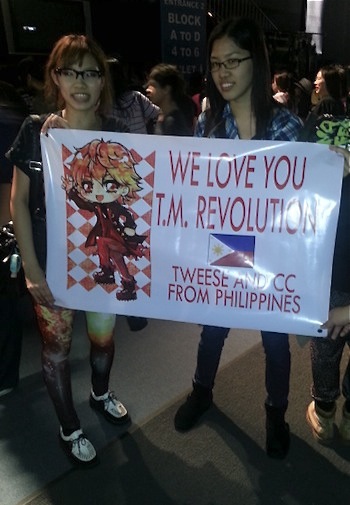 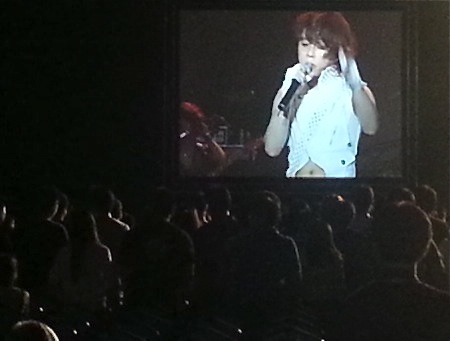 Today is AFA concerto Day 1, with electro stage solo concert starting with TM revolution. For Gundam Seed and Destiny Fans, 3 songs per series came from TMR. Takanori-san was a great singer like X Japan. T.M.Revolution promotes great Pop J culture and big influence in anime culture. And he loves his super long long long long drag voice!!! He also thanks people who help Japan over disasters. Just started his charity in music for less fortunate people to unleash their potential in music.

About the tickets, there are 3 tiers, VIP gets to ballot to meet T.M.Revolution at back stage for photos and autographs through balloting. This was T.M.Revolution first solo concerto in Singapore. Singapore Fans are very lucky to have them at 61 sing dollars to let them perform at AFA events.

Lots of fans from SE asia countries and Japanese. The event host did a great job in stereo and lightning systems. As well as the video on big screen were super clear.

His team band members were very skillful too. BTW to survive AFA concerto… there are some tips to share. If u want a light stick, go buy a beam saber or light saber from toy r us. Do not bring DSLR… or video recording stuffs. Handphone is okay. DO not bring food… Even if you are basic tier, the fans run over the security guard 'bo chap' (don't care) and 'chiong ah' (rush) towards VIP tier. Basic tier also got good seats at better height.

You need to prepare cash in case of AFA and fan purchase items. I forget to withdraw enough money every dollars cents… The AFA personnel’s were very nice, they gave me a 80% discount! For the next year event you should buy all the tier basic which will be great enjoyment! The show encore from 1hr 30 mins to 2hours. TMR TMR TMR!!!

I spoken to one of the Japanese visitors who sat beside at the show. He told me their concert tickets in japan is 4500y to 9000yen. Food and concert is less expensive in Singapore. It is fantastic, I strongly recommend people who love their songs to go for their concert or purchase original CDs! Do keep a look out for other concerts too.

Disclaimer:
This is a truly an original post both pics and content, by my dear friend, Stanley, who had been my AFA 2012 Day 1 correspondent.

T.M.Revolution has sung many awesome songs for Gundam Seed anime and Takanori Nishikawa's 'Heart of Sword' from 'Rurouni Kenshin' is still on my anime A-list after so many years.

I believe their fans will enjoy...

I watched Gundam Seed and Rurouni Kenshin so most of T.M.Revolution songs are familiar to me!

great band and great music !!! no idea about their soundtracks for Gundam series... they have a lot of fans (i saw many girls indeed) =OOOOO... their performance in concert is just awesome... what a pity i’m not so familiarized with bands from Japan =/////

When Stanley email to me how he felt about the concert, I had this burning passion to join him which I'm sure would be very high! The tune and concert atmosphere and emotion of the band is the x-factor.

Bro, got the youtube videos for this day 1 concert available oredi. Search for "i love anisong" and videos posted by user "horsexrevolution"

Very resourceful Guy 'A'! You are most probably at new-type.. Hee! Hee! I should check it out...

They are a great band and would have been a blast to watch them.

Great Vids and thanks for the suggestions!

I hope they come again and I can join Stanley and probably with Guy 'A' too to get high!

TM Revolution has always provided memorable songs for numerous animes since I can remember.

Indeed. Songs that are memorable and able to stand the test of time.