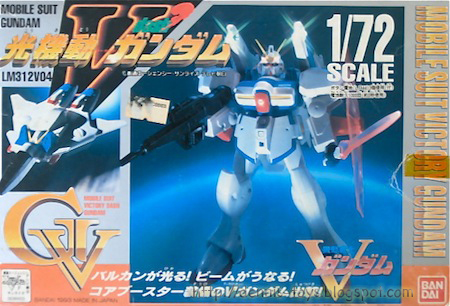 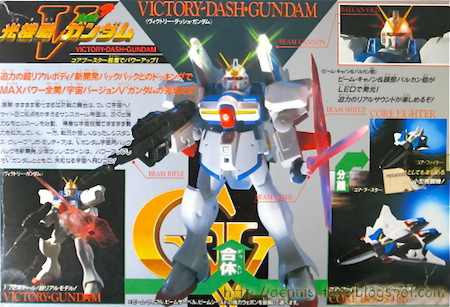 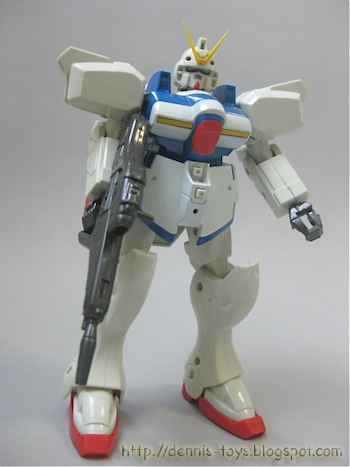 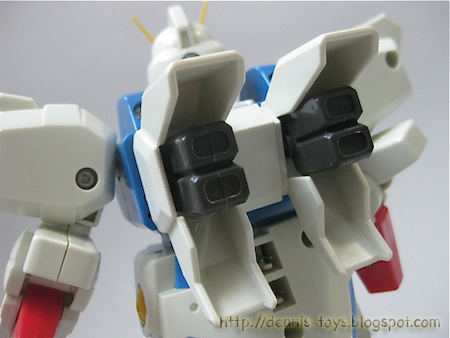 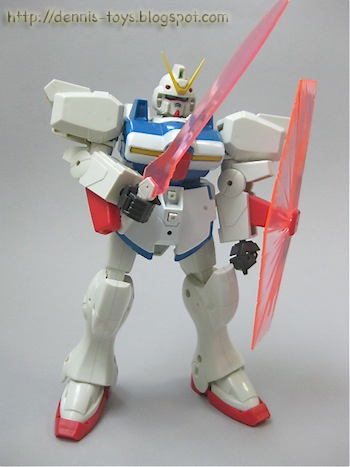 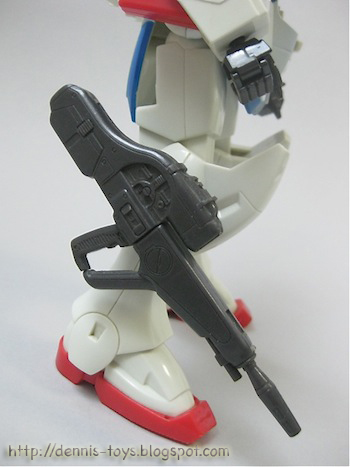 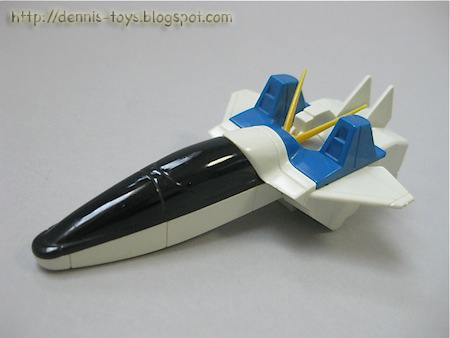 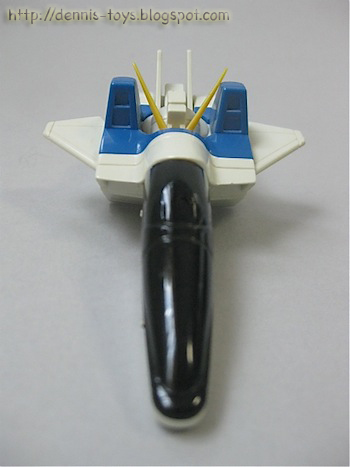 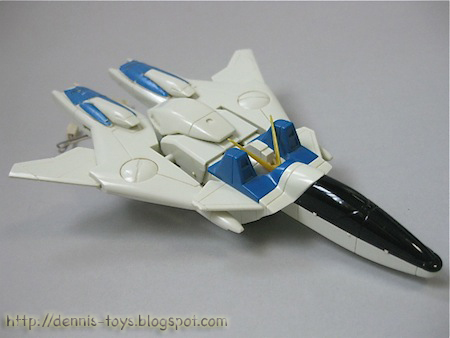 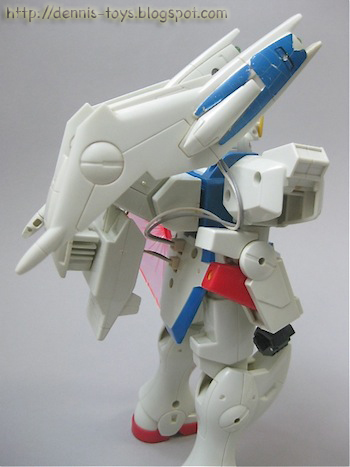 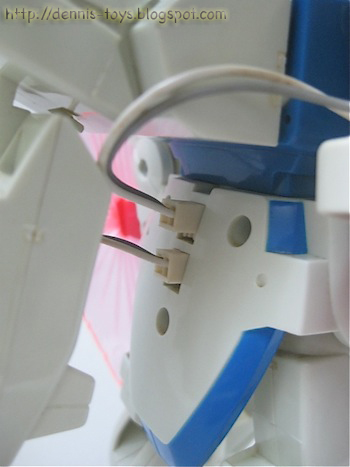 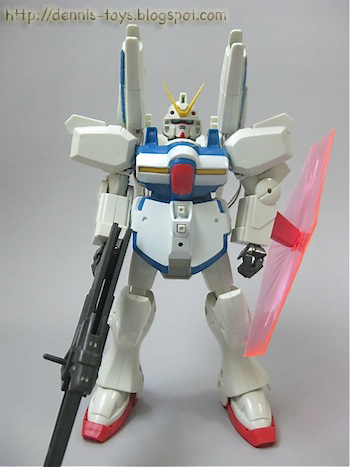 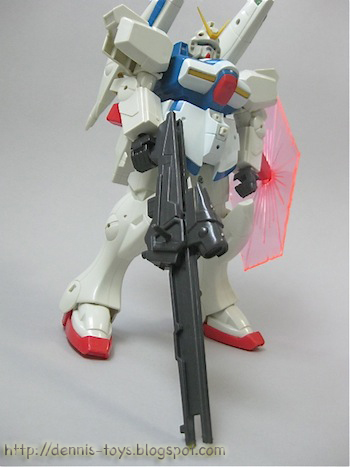 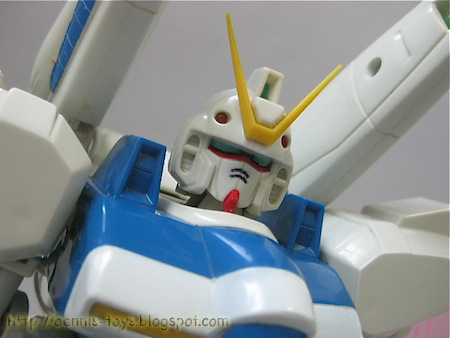 Victory-Dash Gundam, in short V-Dash Gundam is a variant or should I say, an upgraded or modification of the Victory Gundam. An obvious enhancement would the addition SD-VB03A Overhang Pack, which acted as an addition thruster as well as high-power beam cannons that mounted over the shoulders during battle.

This 1/72 scale V-Dash Gundam was produced by Bandai in 1993 (The same year when the anime was introduced). The packaging is toy on Styrofoam insert in cardboard box. This vintage Gundam toy stands about 20cm (8 inches), almost the size of a typical Master Grade 1/100 scale kit. Taking into consideration that Victory Gundam is a smaller mobile suit. Probably because its manned to be a toy or factoring in the electronic function, the overall outlook of the toy appears rather chunky.

It has battery-operated function such as the head vulcans and shoulder vulcans could emit lights and produced rapid firing sound upon a button being pushed. Take a look at the rear of the toy, you will find small sockets and wires running between the Victory Gundam and Overhang Pack. The Overhang Pack can be detached from the Gundam and form Core Booster with combining with the Core Fighter. Other accessories included beam shield, beam saber, beam rifle and mega beam rifle. The length of the mega beam rifle is extendable and alike the beam rifle, it can be holstered on Gundam’s legs.
at July 07, 2012

When I first saw the picture before reading the information you provided I can feel that this is another vintage figure considering the bulky proportion and sculpt.... anyway, I guess with the technology available at that time, this is considered "great" already - at least at that point of time....

In the last 10 years computer and gadgets technology improved drastically and eventually it also helps the toys and hobby industry to further improved their designing and production skills...

Yup. This is considered an old toy and indeed with the drastic improvement of technology, new toys are better sculpt and produced. Inevitably, the rise quality also come with a price.

These period of Gundam is fashionable to have beam shield. After a while, normal shield is still the best. LOL

Beam shield is introduced at a later period U.C line, which I think the creator is very innovative in the concept. Still I like the technology after the one year war till Zeta series...

seriously ??
I thought it was bigger than 1/100 when we talked about 1/72, but still the led operated are a fun side from this figure :D

this is an interesting shorty LOL... i think it must be a similar case along with the F91 (Harrison Madin) Gundam which is slightly smaller than the regular Gundams... the sculpt here is very simple and it looks "fatty" in proportion but is a nice and durable toy... something to point out is that the beam rifle design is quite innovative and has a lot of details, so much that it makes you think that it comes of a more recent generation... a valuable vintage indeed... =)

It would be incredible to see this actually light up and with sounds. I am impressed by all this at a time when that wasn't the norm.

>> RiP666
1/72 supposedly bigger but since V Gundam is a dwarf Gundam. 1/72 makes it just the same size as average Gundam in actual.

>> chrismandesign
V Gundam timeline is after F91. In F91, EFSF still have realatively firm control over the spacnoid and beam shield is at a prototype stage. The EFSF grunts still haven't equipped with beam shield in F91. There's evolution of Gundam U.C Timeline.

>> bluedrakon
Apologies I took out the batteries the time I bought and didn't buy those small flat batteries to replace thereafter.

The lower armour looks a bit weird to me..something like a skirt...hahaha!

Exactly, the lower armour is known as skirt in Gundam terminology. Maybe the skirt was overdo so it really look like a skirt.